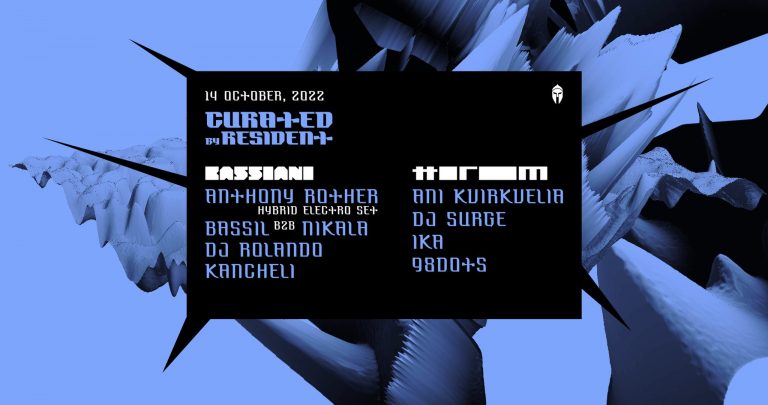 BASSIANI is launching a new series Curated by Resident, during which the concept, athmosphere and sound will be defined by the club’s residents and artists invited by them, who played an outstanding role in creating the electronic music as we know it. On the first night of the series, a leading hero, music enthusiast and virtuoso KANCHELI will be presenting a programme curated by him. On 14th October, playing alongside KANCHELI will be a Detroit legend, owner of R3 records and a former member of cult collective UNDERGROUND RESISTANCE and the founder of Latin techno DJ ROLANDO; An influential visionary, an electro pioneer and sound researcher ANTHONY ROTHER; The member of 11th commune NIKALA and BASSIL, whose albums were released on a SHIN RECORDS label founded by Giorgi Kancheli and Ana Kublashvili.
HOROOM will host the magnificent representatives of the local scene - distinguished artist and spectacular selector, ANI KVIRKVELIA; The founder of SMALL MOVES vinyl shop and label IKA and 98DOTS, whose debut set at HOROOM was met with universal acclaim and emotional response from the dancers. Fulfilling the night’s eclectic programme will be one of the most remarkable representatives of Tbilisi’s new wave, DJ SURGE, who’ll be freely and courageously traveling between the diverse music directions.