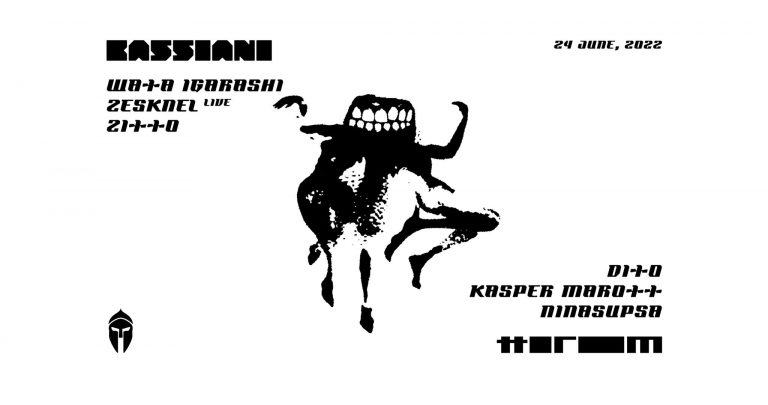 On 24th June BASSIANI witnesses the return of a real treasure of the Japanese techno scene WATA IGARASHI. The foundation of his visionary standpoint lays on the specific attributes of Japanese culture and aesthetics, according to which details and ingredients are equally valuable to the picture as a whole. This aesthetic recognizes the power and beauty of taking care and perfection of the smallest nuances. Such are the works of IGARASHI with crystal-clear structures and shimmering intensity, which are herewith inspired by the eclecticism of the modern world. Concentrating on the energy produced by the mind and body allowed him to create records in accordance with the psychedelic dimension of techno, which found its household on cult labels like FIGURE, THE BUNKER NY, and SEMANTICA.
Defining the music direction of the night alongside him will be a club’s resident ZESKNEL, who always manages to transform the live performances onto a special experience by masterfully conquering the art of sounds, to thereto metamorphose the dancefloor into the space for the collective ritual of listening and thinking. Intervening in this self-reflective process with his characteristic energy will be ZITTO, one of the creators of the club’s classic sound and the author of merciless, dramatic sets.
HOROOM will be taken over by DJ and producer KASPER MAROTT, who’ll be sharing his works created by the synthesis of voiceovers and various music directions in such a unique way, such as his sets, which are based on the constant interplay between the moods, rhythms and styles. Playing on the night will also be NINASUPSA, the founder of one of the most important radio platform of the Georgian electronic music scene MUTANT RADIO, joined by yet another resident of the club, DITO, who played a significant role in creating and defining the ultimate sound of HOROOM.